Continued from North and Central Vietnam…

Though far from my longest bus ride, it took over 25 hours to reach Ho Chi Minh, including a 2.5 hr wait in Nah Trang. Luckily, it was a comfortable ride on a sleeper bus like no other I had experienced: two aisles with three double decker lines of beds. Naturally, when I stirred in the early hours I noticed the aisles were full of sleeping locals too. The regret I experienced from choosing the bus was that, with such a short itinerary, I lost a whole day. If I was to do that route again, or recommend it to anyone, I would instead fly from Da Nang to Ho Chi Minh; it’s a simple route and surprisingly reasonable. 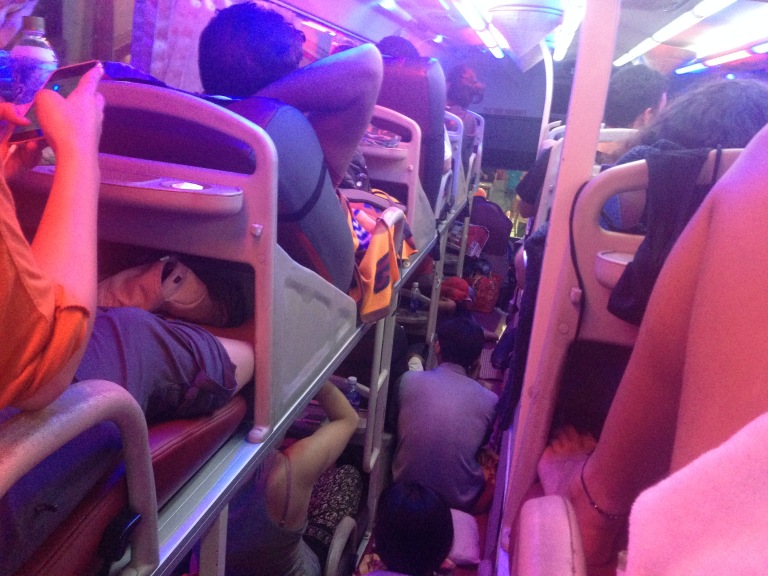 To be expected, this tour was your standard everyone-on-and-off-the-bus type tour.  I’m not entirely sure what our first stop was, but I found myself sitting in a hut amongst exotic trees, sipping on a concoction of local honey, lime and hot water – much like your mum made you when you had the sniffles.  We took a short boat ride along the river and reached another clearing where there was a small sweetie production line. It was made from coconuts and tasted like toffee, and I only stopped devouring the samples because my teeth were becoming worryingly glued together. In the evening, we headed to our homestay which was lovely, but also huge and certainly more purpose built than they would have wanted to let on. Times change, and experiencing the authentic when travelling nowadays is difficult and something you have to actively seek.

The family demonstrated how to cook Vietnamese spring rolls and we prepared some for our dinner. With a mesh like outer, the tasty filling is encased in a tangled nest that has the most glorious crunch! There was copious amounts of food including our spring rolls and freshly steamed fish, which was followed by their home brew rice spirit which, well, did not go down to well. After the obligatory first try, I politely declined a second shot as I thought it best to keep my insides intact.

6am came around quickly and even though I had abstained from drinking the night before, chose to skip the short bike ride tour down to the market. I had firmly learnt from the Tai Chi in Ha Long Bay – amongst on other occasions – that my body does not agree with exercise at the crack of dawn. We had a quick breakfast at 6.30am (something that also doesn’t agree with me) and then hopped on a boat to visit the floating markets. Self-explanatory, this is a series of merchant boats, each with a different good to trade. You can identify which boat to steer towards as their product will be speered onto the of a bamboo stick and displayed high up for all to see. Much like a supermarket, you just had to peruse the waterway until you find the right ‘aisle’.

Afterwards we went to another hut in the thick of the jungle to learn how rice noodles are made. This bit was fascinating and it was really cool to see the whole production process, from the cooking, drying and cutting through to packing up ready for market.  Our last stop was Vinh Trang Temple near My Tho which has to be home to one of the World’s largest Buddha statues. After a quick lunch, we boarded the bus for the last time and did the long journey back to Ho Chi Minh, arriving home early evening.  I popped out for a duck broth and noodle dinner on the side of the road and then headed back to get an early night. 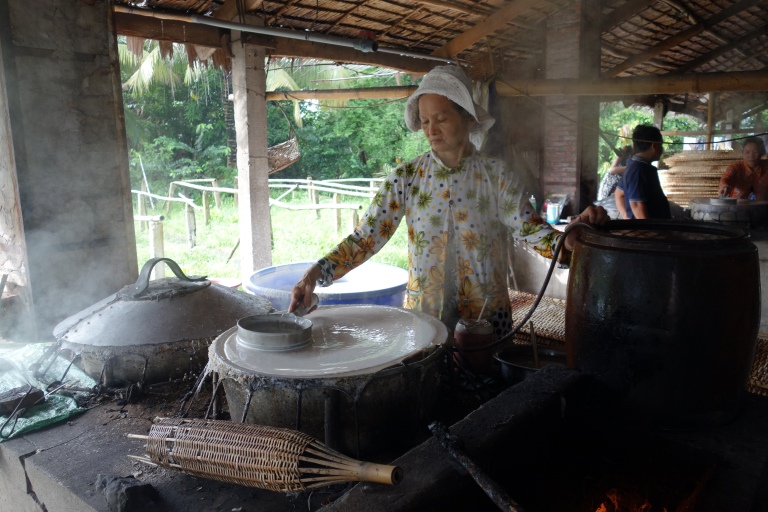 Ho Chi Minh, formerly known as Saigon, is just as chaotic as any other Vietnamese City. Though perhaps maybe more: people drive faster, there’s even more cars and bikes on the road (who would have thought it possible?!) and dodging the cars was no longer a funny game and more a genuine health concern. I headed to Ben Thanh market which had an extensive looking line-up of food offerings, but otherwise just full of rip-offs and tat. For example, on offer was Urban Decay Naked eyeshadow pallette 7, 8 and 9 – which is seriously cool considering the brand have only released palette 1, 2 and 3…! However, I did locate some pomelo to munch on, which is my new favourite Asian fruit! It’s similar to grapefruit, only slightly sweeter and about the size of a large melon. I ended up briskly leaving the market after getting fed up of people grabbing me and blocking my path.

My main aim of the day had been to visit the War Remnants Museum, so I headed that way in time for its opening. It cost about 15,000 VND for entry and I think it’s best to allow at least a couple hours for full absorption. Few museums so graphically portray the sufferings and atrocities of war, and to say it was harrowing would be something of an understatement. Not one for the faint hearted. My criminology module on War, Atrocity and Genocide at University had totally gripped me, and had been my first real introduction into the Vietnam War. Whilst some stories there are clearly one sided, it was interesting to see it from another perspective – certainly an important history lesson and one we all too often don’t see. Though there wasn’t a wealth of information, there were supporting photographs and artefacts that all together told the story.

Whatever your view on the war, or I guess war in general, you cannot enter the napalm room without having your emotions tested or your stomach churned. It may be several decades since the war ended, but the effect of attacks like Agent Orange still have devastating consequences. Even children born as late as 2002 – a whole decade younger than me – have grown up with severe and debilitating deformities. Cultural and natural heritages have been destroyed. The post-war after math is innumerable, but somehow the Vietnamese remain a mostly positive and forgiving nation.

To lighten the mood, I decided to finish my day with a trip to the cinema. Finding Dory was out and knowing it wouldn’t be reaching home for a couple of months, I decided to be ahead of the game for once. Plus, the ticket only cost me 65,000 VND which might just be the cheapest cinema ticket I’ve ever bought!

I tried to locate a certain cafe but got totally lost on google maps and ended up in a deep maze of unmarked lanes. These narrow streets were packed full of local families, sitting together outside their houses or having their hair cut in the make-shift barbers. It was chaotically beautiful and the first time I felt that what I was seeing was totally genuine. The locals were somewhat shocked to see me there, but also smiled back so I never felt uncomfortable. I was so captivated that I barely took any photos, nor did I want to appear flashy or like a prying tourist. I did ask one gentlemen who was sitting up in his house if he minded me taking a photograph; he briefly smiled, nodded his head and then went straight back into a state of deep contemplation. I never found the place I was looking for, but that’s neither here nor there.

I had something of a nightmarish journey leaving Vietnam, but I won’t bore you with the details. To cut a long story short, even after all my clever planning to make North to South Vietnam fit in exactly 15 days (which I did), I had to pay $20 (4x the going rate) for ‘overstaying my welcome’…such is life!