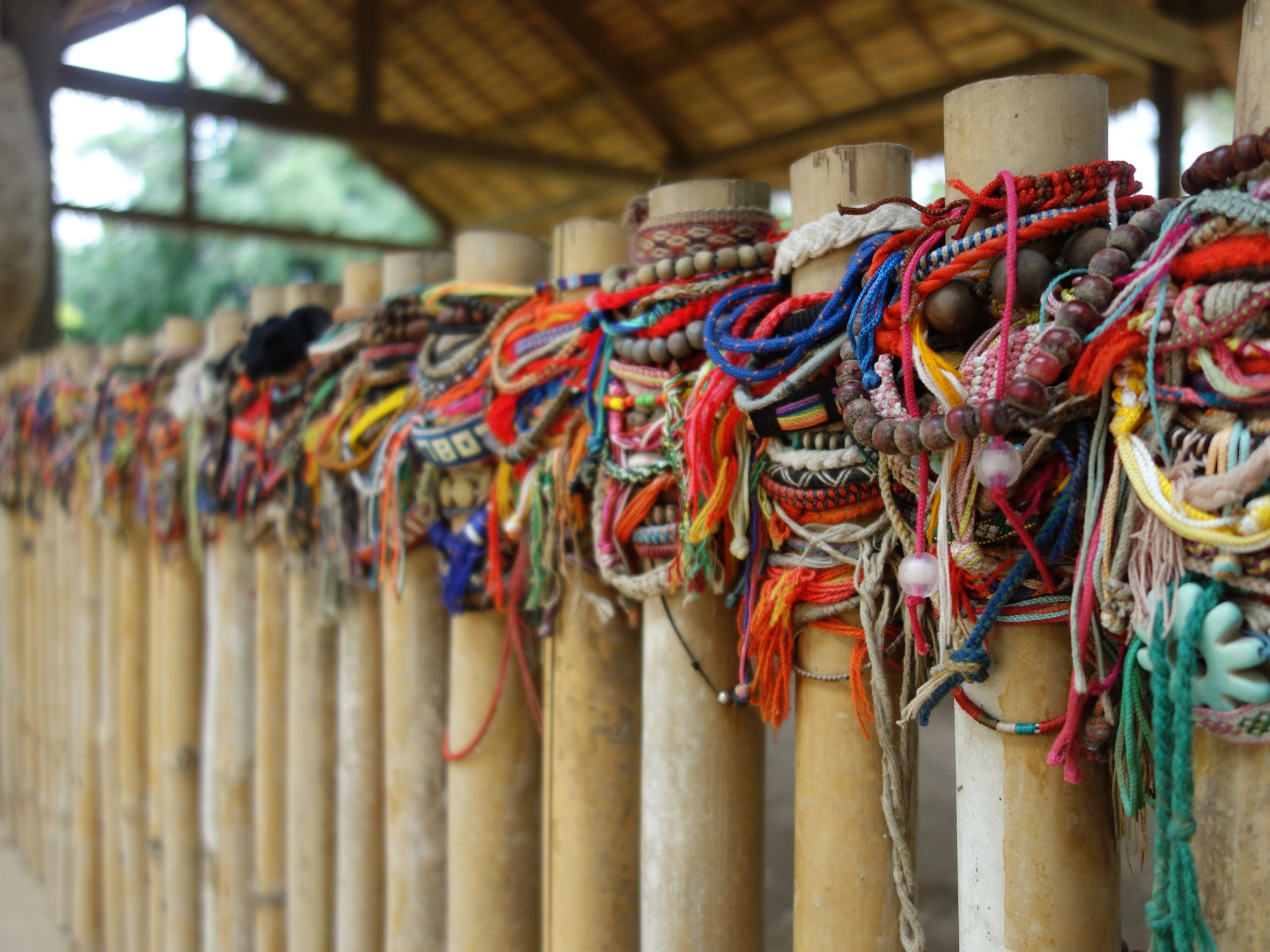 Morning came around and we were carted off the bus;  I was exhausted and still reeling from the stresses of leaving Vietnam. But onwards and upwards, I was onto my 19th country of the trip…the last new country, but not my final one!

I already knew the hostel was too far to walk to, so I agreed to make use of one of the drivers who hadn’t left my side. He refused to take the last of my dong, so we agreed he would detour via a cash machine for no additional cost. The tuk-tuks in Phnom Penh looked like they were all on steroids so I was at least confident both myself and my bag might make it there in one piece. Surprised and immediately irked, withdrawing cash had cost me £10 more than suggested on my trusty currency conversion app.  I assumed I had just picked a bad ATM. I later discovered the real reason it cost me so much more when I reconnected to wifi in the hostel…it has slipped my mind that the day I entered Cambodia was also the day of EU referendum, and well, we all know the rest. What was 46 THB mere weeks ago was going to now cost me 52 THB; I had to accept that the rest of my travels was going to rinse me of at least 10% more than expected. Double blow.

Nearly ready to face what was flooding BBC News and my Facebook newsfeed, I headed out and found the closest and most westernised café possible (with excessive air conditioning, so I felt really at home) and ordered an English breakfast tea, to catch my tears in.

I walked to What Phnom which whilst built in 1372 and thus clearly steeped in history, first appeared as a very jazzy roundabout. My attempts at finding some peace there was quickly thwarted by what I first assumed was raindrops but later ascertained was a monkey pissing on me.  On my meanderings home I stopped by the night market. It wasn’t anything to write home about – filled with replica watches and tacky clothing, similar to Hanoi. Not a patch on the beautiful crafts and souvernirs to be found in Ubud or Chiang Mai. I moped home and walked the 30 thousand flights of stairs to my top bunk in the dorm room on the very top floor. Let me remind you that hot air rises.

What we can both deduct from this blog post so far is that yes, I had a crappy day, but also, I like to moan. A self-proclaimed pessimist, I’ve had a lot of practice.

What I didn’t know, was that what was waiting for me was about to knock me for six.

Few are willing to share the untold secret that when travelling, nearly every good/great time is matched with a bad/annoying one. The road often feels like a life of extremes – one minute you’re in an all-encompassing state of awe staring a wonder of the world in the face, and the next you’re lying awake scratching insect bites in an filthy 20 bed dorm whilst the inconsiderate couple above you uncontrollably shake the bunk bed (well, at least someones having fun).  What I’m very sorry to admit is that, whilst travelling opens your eyes, sometimes you lose perspective too; unreal destinations disappoint and don’t live up to your hype (thanks for aiding that, Instagram), or you become unreasonably disgruntled to find everything is more expensive than detailed in the guide book written six months ago (how dare economies fluctuate?!). And then something so deeply sobering, real and heart-wrenching reminds you how precious life is and how grateful we should be just to be living… You can see. You can eat. You can breathe. All the moaning and minor heartache is suddenly so incredibly inconsequential.

Visiting the Vietnamese War Museum and Auschwitz last year were both harrowing experiences, but I knew to some degree what to expect. Ignorantly, I knew next to nothing about Cambodia’s violent history. In an attempt at education, I joined two girls from the hostel, Hollie and Becca, in a tuk tuk and headed first to Choeung Ek Genocidal Center a.k.a the Killing Fields Of Pol Pot. I don’t know what to tell you about this place. It’s deadly quiet. Sweat drops onto the dusty floor where unfathomable amounts of blood was once shed. The central memorial showcasing over 5000 shattered skulls plays as a reminder at every turn. The audio tape everyone ambles around with is informative and rarely sensationalist; it doesn’t need to be – the facts alone and evidence plainly in front of you is emotive enough.

The tuk-tuk then drove us on to Tuol Sleng Genocide Museum. Again, entry was $3 and an additional $3 for the audio (which I felt was less imperative here). We spent 1.5hrs at each location, though I could have spent double that at the museum. The now museum was originally a high school before its conversion into a prison in 1975. Tuol Sleng, the name given to the prison, means “Hill of the Poisonous Trees”. I walked alone through the bare rooms, bemused by the never ending horror caused by the nefarious desires of another warped dictator. Over four years about 20,000 innocent people were killed there, with only 12 known survivors. Let that just sink in. You can imagine my shock to find one of those survivors sat at the exit, humbly sharing his biography. His story had stuck with me in that hour and I didn’t think twice about buying his memoir. He welcomed us with a smile and asked if we would like a photo; we agreed, awkwardly not knowing if smiling was the appropriate response after such a woeful afternoon. To set the scene, I was constantly recommended a book called ‘First they killed my father: a daughter of Cambodia remembers’, and finally got my hands on it in Angkor Wat. I read it all in a matter of days. 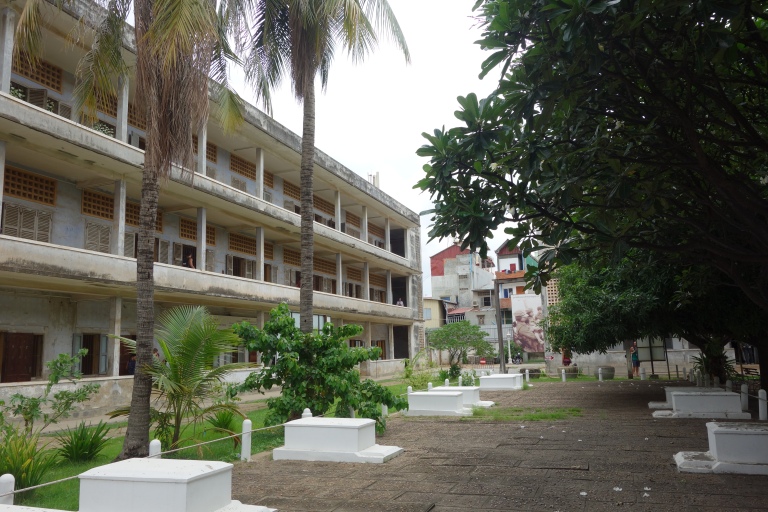 Though they weren’t the most cheerful of activities, both Choeung Ek and S-21 Prison are places I would highly recommend visiting if you travel to Cambodia, especially if you stay near Phnom Penh. Take a box of tissues and a compassionate heart, and promise yourself you’ll do what you can to make the world learn from it. For them, that’s the very best we can do.